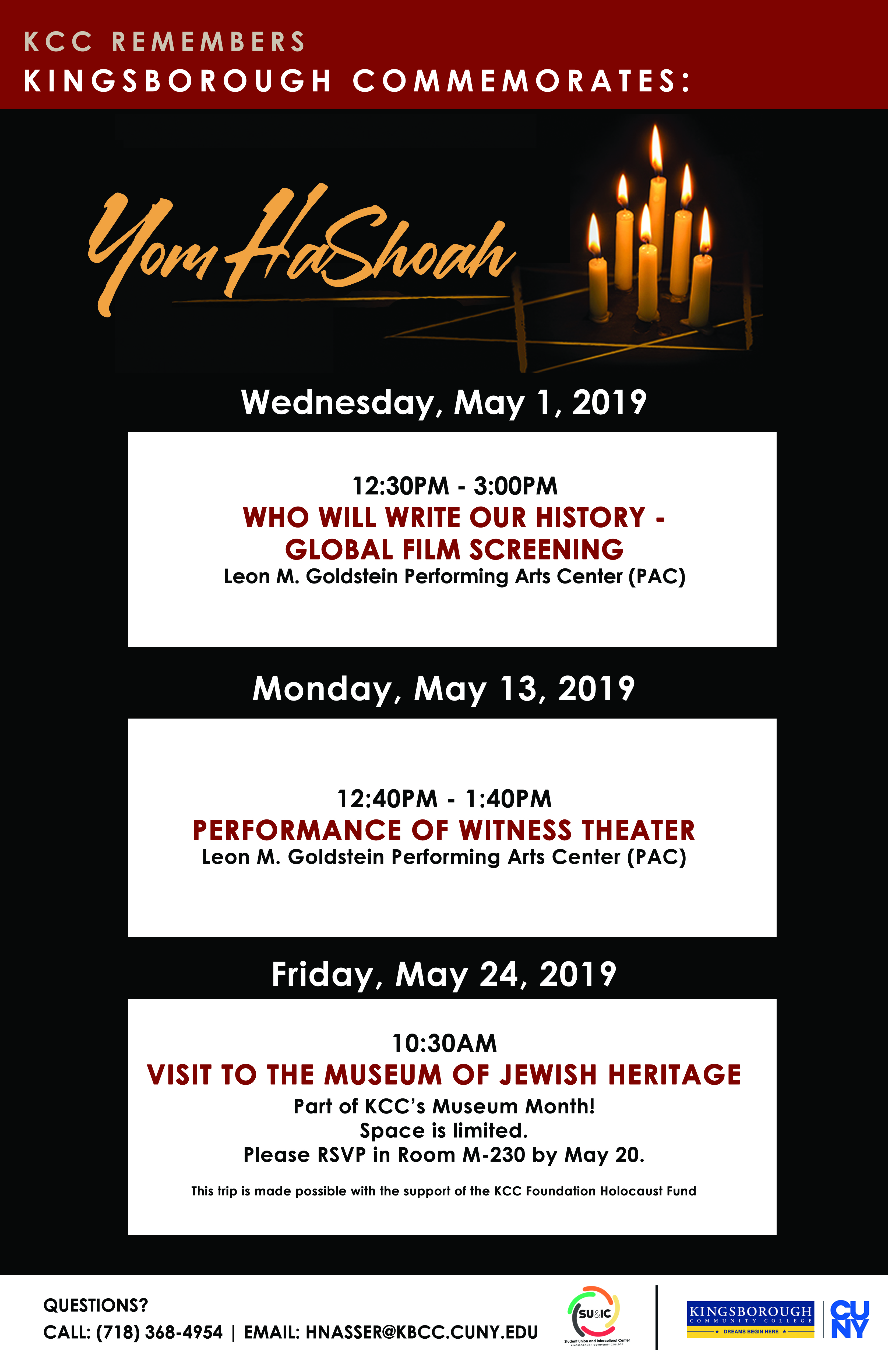 The Kingsborough-Manhattan Beach Holocaust Memorial Center is pleased present the following events to commemorate Yom HaShoah. Please see below and kindly let me know if you would like to attend with your classes.

Who Will Write Our History – Global Film Screening

In November 1940, days after the Nazis sealed 450,000 Jews in the Warsaw Ghetto, a secret band of journalists, scholars and community leaders decided to fight back. Led by historian Emanuel Ringelblum and known by the code name Oyneg Shabes, this clandestine group vowed to defeat Nazi lies and propaganda not with guns or fists but with pen and paper. Now, for the first time, their story is told as a feature documentary. Written, produced and directed by Roberta Grossman and executive produced by Nancy Spielberg, Who Will Write Our History mixes the writings of the Oyneg Shabes archive with new interviews, rarely seen footage and stunning dramatizations to transport us inside the Ghetto and the lives of these courageous resistance fighters. They defied their murderous enemy with the ultimate weapon – the truth – and risked everything so that their archive would survive the war, even if they did not.

Open to the public. Please RSVP to: hnasser@kbcc.cuny.edu

Witness Theater  is an innovative intergenerational program in which Holocaust survivors and high school students work together to elicit, expose, and memorialize the moving stories of survival. Through an eight month drama therapy process, group members explore issues of war, loss, and trauma while at the same time forming deep and meaningful relationships that dissolve the barriers between generations. Students and survivors meet in weekly two-hour sessions over the course of the academic year with a trained drama therapist and other program staff. The project culminates in a staged production with the students portraying the personal experiences of the group’s survivors, and the survivors narrating their own stories.

The program aims to involve Holocaust survivors in a therapeutic process designed to help them come to terms with their past, and at the same time to instill the memory of the Holocaust in the next generation. The public performances serve as a vehicle for the survivors’ testimonies to be heard by many and to witness the special connections made between the generations.

Open to the public. Please RSVP to: hnasser@kbcc.cuny.edu

Visit to the Museum of Jewish Heritage

The most significant site of the Holocaust, Auschwitz was not a single entity, but a complex of 48 concentration and extermination camps, at which 1 million Jews—and tens of thousands of others—were murdered. This groundbreaking exhibition brings together more than 700 original objects and 400 photographs of Auschwitz, from over 20 institutions and museums around the world. Auschwitz. Not long ago. Not far away. is the most comprehensive exhibition dedicated to the history of Auschwitz and its role in the Holocaust ever presented in North America, and an unparalleled opportunity to confront the singular face of human evil—one that arose not long ago and not far away.

Space is limited. Please RSVP in M230 as soon as possible. Trip is made possible with the support of the KCC Foundation Holocaust Fund. Part of KCC’s Museum Month! For KCC Students only.

Need help with the Commons? Visit our
help page Send us a message

Built with WordPress Protected by Akismet Powered by CUNY